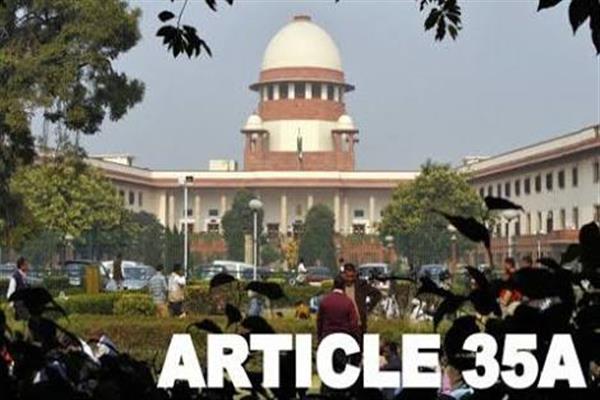 A day ahead of Friday’s hearing, Jammu and Kashmir woke up to an isolated road on Thursday using all kinds of transports, educational institutions and business establishments remained closed on a shutdown call by separatists across the state. The Supreme Court on Friday adjourned the hearing petitions challenging the constitutional validity of Article 35-A that provides special status to individuals of this state. The court has recorded the matter for hearing in the next week of January 2019.

Separatists leaders Syed Ali Geelani, Mirwaiz Umar Farooq and Yasin Malik, under the banner of Joint Resistance Leadership (JRL), called for a two-day strike as they fear the judgment Bharatiya Janata Party along with its ideological mentor RSS – a controversial right-wing organization will alter the demography of the Valley.

People those are involved in this petition

A three-judge bench comprising Chief Justice Dipak Misra, Justice A M Khanwilkar and Justice D Y Chandrachud, is hearing a few petitions to the topic, such as the one registered by We the Citizens.

There was, which A Request Registered ” We the Citizens, with an NGO, Contended that Article 35A and Article 370 of the Constitution Contrasts among rest of India and the citizens of Kashmir and Jammu.

The NGO required the apex court should term Article 35-A”unconstitutional” because it had been a”temporary supply” that came into effect instantly and wasn’t introduced before Parliament.

People are giving their views on this petition.Lets have a look. COVID 19: A Pandemic which showed the World that resources should...

How packaging helps in your Brand positioning?

Assembly Election 2018: Counting for 5 major states will start on...