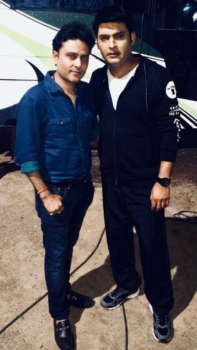 One of the most popular comedians in India, Kapil Sharma ruled over the Telly world with his show ‘Comedy Nights with Kapil’.  Conceptualized by the man himself, the show was an instant hit among the Indian viewers and gradually gained popularity overseas as well.

‘Comedy Nights with Kapil’ catapulted Kapil Sharma to success overnight. Due to its massive popularity, the show and its talented host became sought after by Bollywood superstars for the promotions of their movies. From veteran actors like Dharmendra, Amitabh Bachchan, Vinod Khanna and Jeetendra, to ‘90s superstars Govinda, Madhuri Dixit and Juhi Chawla, along with famous sportspersons like Sania Mirza, Virat Kohli, Irfan and Yusuf Pathan – Kapil Sharma’s show hosted them all.

However, the great success of the unique show was overshadowed by a series of events that followed. First, the set of the show caught fire in September 2013, and later, a heated argument between Sharma and his co-actor Sunil Grover ended up with the latter calling it quits. Grover later re-joined the team, only to quit it once again in 2017. Following the spat among the co-actors, the show subsequently went off-air in August 2017.

While the Indian Janta is divided upon whether it was ‘Bittu Sharma’ or ‘Mashoor Gulati’ at fault, celebrity astrologer, and life coach Sundeep Kochar have a different take on the affair. According to the famous astrologer, who was consulted by Kapil Sharma a few years ago, the way events have unfolded is due to fault in Sharma’s stars.

Sundeep Kochar took to popular social networking site Facebook to express his opinion on the matter. His FB post stated, “I happened to meet Kapil Sharma after his show took off. I had studied his horoscope and forewarned him about the unfavorable Shani-Ketu Dasha. My warning turned out to be true; the show’s set caught fire in September that year.” According to the celebrity astrologer, the hardships Kapil Sharma is facing right now are just a part of ups and downs we all go through our lives.

“Kapil has a great horoscope. He is going through a turbulent phase right now because of changes in his grahadasha, but everything will be fine soon. Present Saturn-Sun phase is responsible for disputes, litigation or conflicts in life which will be over by December this year. Once this phase will be over, he will bounce back and achieve bigger success,” his post read further.

According to Dr. Sundeep Kochar, a person’s success or failure is a mixture of his karma and his grahadasha. “Kapil Sharma is a man of immense talent. Time and fate don’t always support everyone. There is an old saying: ‘Success attracts more enemies than friends.’ I personally believe that same has happened with Kapil Sharma & no one has to be blamed for this situation. I would advise him to do meditation for more peace and happiness within. However, once he has gone through his share of hardships, it will be his time to shine yet again, as Geeta says: ‘Nothing is Permanent in Life’. I am sure his best is yet to come,” Kochar wrote in his FB post.

How To Register For Shark Tank India Season 2

Tips For Immunity Boosting In The Time Of Coronavirus