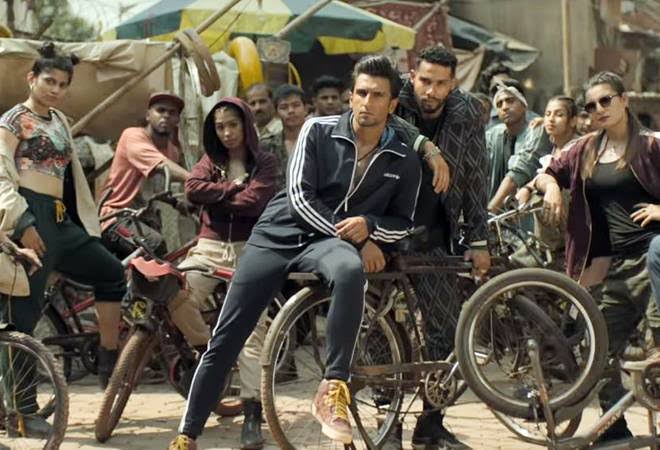 Zoya Akhtar aced it all with the release of Gully Boys. She has managed to get together a perfect script along with best actors in Bollywood under a single name. We are not saying this but everyone is talking about it only. The cast includes Alia Bhatt, Ranveer Kapoor, Amruta Subhash, Vijay Raaz, Sheeba Chaddha, Kalki Koechlin and Vijay Verma. The story is everything that an artist goes through – adversity, heartbreak and a society that never understand the passion of an artist. A person who has no privilege or was born with a silver spoon struggles to reach the top.Ranveer arranged a special screening for Deepika .

It’s a story of how the lonely and hard long road of Murad (Ranveer Singh) makes it through all the odds and reach the top. Well, not entirely like Slumdog millionaires but from Dharavi Slum to the storyteller through raps can be oddly amazing. Murad with his talent was able to convert all of his life frustration into the rap. Due to the bleakness and poverty that he faced, Murad was prepared for his life on a new end. He believed that the ticket out of the Slum hellhole is rap.
However, his father (Vijay Raaz) who is a chauffeur wants his son to be educated. However, Murad followed a different route when he is not busy with beautiful yet possessive and fiercely girlfriend Safeena Firdausi that is played by Alia Bhatt. Apart from this, his life journey showed two of his friends Salman played by Nakul Sachdev and Moin played by Vijay Verma.

The actors put their cent percent in the film from the Kohl in Ranveer’s eyes to the mind-blowing performance of Alia’s end. They both have to dig up the whole move in an ultimate awe-aspiring. Ranveer Singh is already considered as the top actor in the Bollywood with the bag full of talent. Especially after his amazing performance as Alauddin Khilji has made him at the top. His second best performance is going to be Murad with perfect accent and screen space that is worth remembering.

Even Alia Bhatt managed to put herself in the new light after some of the amazing performance on her end. The charming voice and accent made her worth the role. However, it’s a shame that she wasn’t able to do much even after such a big talent with limited time on screen. Her feisty side was the sight to behold and her Muslim girl avatar took over every other performance. After all, she beat up girls that were flirting with Murad.
Apart those, Sheeba Chaddha was seen as the mother of our feisty lady and Vijay Raaz, Ranveer’s father in the movie along with Sher played by Siddhant Chaturvedi stole the limelight perfectly. Zoya character could have done much better with a better screen that put the movie on hinges. Also, a good story is said to be amazing when it goes at a good pace. But with Gully Boys, it managed to kill off due to the slow pace with an abrupt end. That after win glory was surely missing out in the whole movie that was all it takes to steal that single star.
However, with the theme of music, this movie managed to do amazingly well in the field with some amazing soundtrack. Also, the music is the heart of the whole movie with scream revolutions in the lyrics. When the whole Bollywood is working on the demagoguery, Gully Boys is something that we all needed. This whole-heartily nature of the movie will win all the energy at the right time.

I think you should watch Gully Boy kyuki “Apna Time Ayega”.Best wishes to Ranveer and Alia for a good opening of the movie.

The right work environment is more important than ever in a...