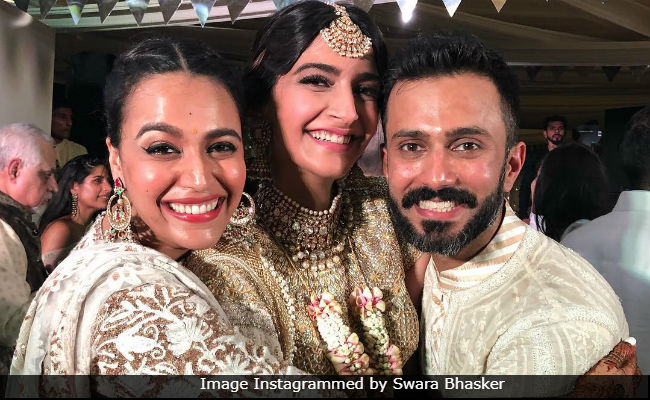 Sonam Kapoor and Swara Bhaskar are playing bestie roll in the upcoming film “Veere Di Weeding”.In real life they are very close to each other. In recent interview Swara revels that Sonam postponed her wedding just because of her. She revealed that according to astrologer visited by Sonam’s parents date for the marriage was 12th March. On the same day Swara’s brother was getting married that’s why Sonam postponed the wedding.According to Swara , Sonam asked her to change the date of her brother’s wedding.

Sonam Kapoor and Swara Bhaskar was with each other throughout the wedding functions. Sharing pictures from Sonam’s sangeet, Swara wrote, “@sonamkapoor you are one of the most genuinely beautiful and giving people I’ve ever known.. There have been so many times I’ve learnt from your generosity & gracious conduct. You have such a big, loving giving heart.. and it seems you have found a fellow genuine, generous, loving soul in @anandahuja .. May your life together be full of every joy, contentment & celebration. Here’s to long and happy innings of togetherness & bliss u both! Get ready for ‘digital experience’ at your next hotel stay: Suresh...

How Do You Write Your Term Paper?