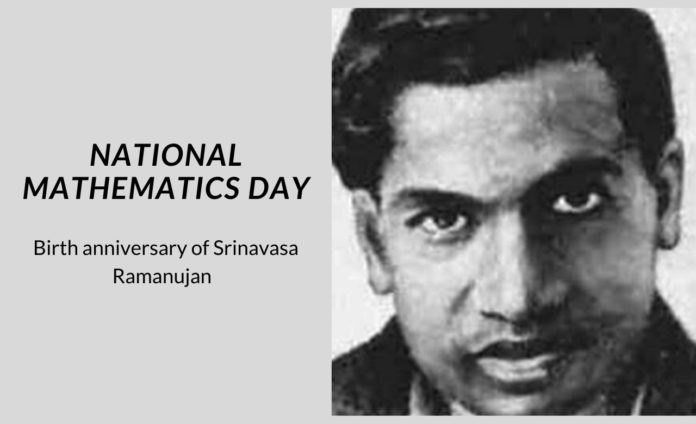 What is “National Mathematics Day”?

Celebrated around the national mathematics community, every year, on 22nd December, it marks the birth anniversary of Srinavasa Ramanujan, a South Indian Mathematician, regarded as one of the giants in Pure Mathematics. On the 125th birth anniversary of Srinavasa Ramanujan,  it was declared, on 26th February 2012 , by our Former Prime Minister, Manmohan Singh, that this day will be celebrated as The National Mathematics Day.

An prodigy, Ramanujan, never had a proper formal education in pure Mathematics, yet he made essential contributions to major fields of mathematics such as number theory, Analysis, Infinite series and continuing fractions. He introduced solutions to many problems that were considered unsolvable then.

Ramanujan, began in 1913, at the age of 26, a correspondence with GH Hardy, of Cambridge University, the best known Pure Mathematician in the world at that time, so that his work could be better understood. Impressed by his originality, Hardy arranged for Ramanujan to come to Cambridge.  He had no means to go to Cambridge by himself. It is said, that Ramanujan, while in India, used to spend hours in his local Goddess Namagiri’s temple, scribbling mathematical theorems, which he claimed, was told to him in his dreams by the Goddess herself.

Though he lived for just 32 years, in his short life span he compiled almost 3900 mathematical theorems and results of which many opened new ways to almost new areas of mathematical research. His theorems have become one of the pillars of string theory, the biggest contender of Theory Of Everything.

Recounting an incident, when he was admitted in hospital in London, Hardy came to visit him. The cab that Hardy took had a registration number 1729, which he described, “was rather dull” to which Ramanujan said that it’sthe first number that can be expressed as the sum of cubes of two numbers in two different ways (12³+1³ & 10³+9³) displaying his instantaneous mathematical genius.

A brahmin, in his own words, “An equation for me has no meaning, unless it expresses a thought of God”,. Ramanujan maintained his promise to be a vegetarian that he made to his mother whilst coming to England. His life was a perfect balance of Religious spirituality and Mathematical Rationality.

A Reason for India to be prideful On Ramanujan

Ramanujan became the second Indian to be awarded with FRS (Fellowship of The Royal Society) and the first Indian to became A Fellow Of Trinity College, Cambridge, the college where giants like Isaac Newton, JJ Thomson, GH Hardy himself have studied. He through his work in Partitions impressed the whole mathematical community of Cambridge.

The Life Of Ramanujan and the way he lead it, motivates us all to pursue excellence and to push through hardships to achieve our goals irrespective of our background, no matter how poor it might be. A dedicated student, he also inspires us to pursue knowledge for sake of learning not for the sake of achieving mere materialistic things, with a balance of spirituality.

Will Bihar Election 2020 and Leaders Promises will be able to change the public’s faith?

Why Sushant Singh Rajput death cause is concern of Shiv sena and Uddhav Thackeray government?

Captain Marvel Review In India : how the marvel stars are...