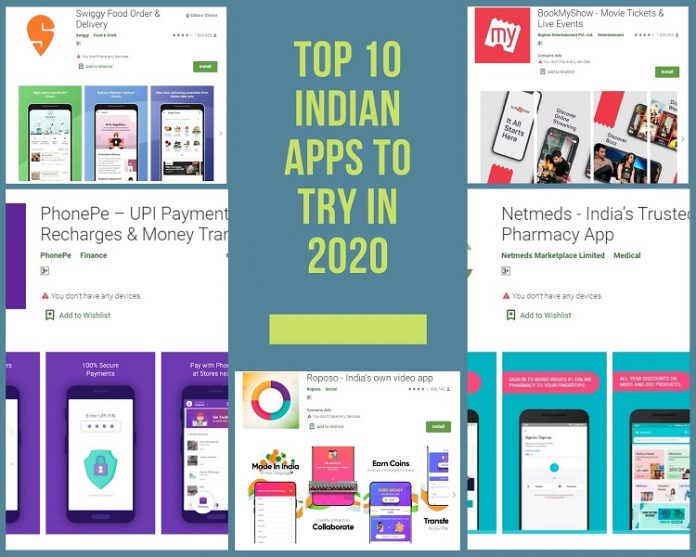 India is doing quite better in developing user-friendly and worthy apps for some time and had reduced its dependence from apps that aren’t native. While big fishes of app industry are still of a foreign origin used widely in India including Facebook, Whatsapp, YouTube, Instagram, Snapchat, etc, there are dozens of excellent Indian apps also used by millions of people in India.

We are going to discuss those apps in this post and if you are looking for top Indian apps to try in 2020, you have come to the right place. India has one of the largest smartphone user bases in the world we Indians are blessed to access good internet connectivity which is also cheapest in the entire world.

The digitalization in the Indian subcontinent had boosted the app industry drastically. From shopping to music and from online payment to social networking, there is an app for almost everything these days. Let’s have a look at the app I have listed below:

Music and video streaming apps are popular all over the world and there are many of them in India too. This app was developed by a South Korean developer firm named J2 and later acquired by an Indian company in 2018 by Times Internet.

With more than 50 million downloads, MX Player is one of the top apps in the Indian subcontinent. Apart from streaming videos and music, MX Player is also doing great in producing web series and on the way of being an Indian version of Netflix.

The ban of Chinese short video creating app TikTok has given wings to the Indian app developers and they have come with dozens of alternatives. Roposo is one of them and had earned huge popularity and user base in a very short time period. This app has a better user interface, navigation, and exclusive features which makes it different from others.

In a time period of fewer than three months, it has gained huge success with over 5 million downloads and that’s undoubtedly a big deal. Chingari has also got a lot of appreciation and love from the Indian community and competing greatly to make its mark in the industry of video creation apps.

When it comes to digital banking, Paytm has become the topmost choice for the Indians. The app was founded by a Noida based entrepreneur Vijay Shekhar Sharma in 2010. At the initial age of its foundation, it offers services like DTH and prepaid mobile recharge.

Nowadays, Paytm has become a giant conglomerate and deals in various things including digital money transfer, online shopping, ticket booking, and many more. No matter which kind of payment thing it is, consider Paytm for the best experience.

With the almost same number of downloads compared to Paytm, PhonePe is among the most used apps in India for digital money transactions. These payment apps provide a great convenience in transferring money and paying bills and India with a population of more than 135 crore people is going to be the huge user base for apps of multiple genres.

Entertainment and video streaming apps own a huge share in the app industry. When it comes to top video steaming entertainment apps the list is huge consisting of Netflix, Hulu, Disney, Amazon Prime, YouTube, Quibi, and many more.

India has its own bunch of native video streaming and entertainment apps and the list starts with HotStar. Watch your favorite Star TV shows, movies, and sports from your comfort zone using HotStar and other Indian video streaming apps.

Food delivery isn’t a new thing but the scale and access of these services have increased drastically over just a few years. Swiggy has evolved as one of the top food ordering and delivery apps in a little time and is known for providing the best service to its users.

You won’t believe but this platform conducts more than 1.5 million food deliveries on a daily basis in India. This food delivery app allows its users to order food from their favorite and local restaurants and also provides them with real-time delivery updates of their orders.

Now it’s time to include an Indian shopping app and nothing is much deserved than Flipkart. Amazon also does business but Flipkart has a bigger number of user bases compared to that US-based online shopping giant. Flipkart has evolved as India’s largest e-commerce website and can be accessed via its parent app too.

Are you fond of watching movies at the theatre?

If yes, then this app will come handy for you in booking movie tickets and a lot of things happening in your city such as concerts, events, plays, etc. I have used this app and if I got a chance to review it I will say a lot of good things about this particular Indian app. It allows you to check the showtimes and book tickets of your favorite seat at the gallery.

It’s an Indian version of eBay and quite popular too. You can make your things sell and make money via this app and can also buy a lot of kinds of stuff easily. Very easy to use and you don’t have to pay even a penny to place a bid for the products you are willing to sell. Allow its users to call or text the buyer or seller and make the best deals possible.

This online pharmacy owned by Dadha one of the oldest pharmacy chains in India operated since 1914. The best thing about this pharmacy delivery platform is that it lets you order medicine from anywhere no matter if it doesn’t lie under the Indian territory and get your medicine delivered nest to your doorsteps in just a few days.

Just upload the prescription and place your order. NetMeds also provides better deals on its products and gives almost a 15% discount on every order. It comes with both modes of payments such as cash on delivery and online transactions.

The Indian app industry is booming and had got a boost after the ban of multiple renowned Chinese apps. When it comes to most used apps in India, there are hundreds of them and different nationalities. Chinese apps had also a good share in the Indian app market but with the rise of anti-China sentiments due to the national border conflicts, the demands of Indian made apps have rise heavily.

If you are also looking for native apps then there are plenty of them. Whether you want to do shopping, recharge, pay bills, book tickets or watch TV shows, there is an app available for every purpose and they are proudly Indian too.

PSB Amalgamation: Will it Change the Face of Indian Banking System?