OnePlus is all set to launch the new OnePlus7 and OnePlus7 Pro phone in India on 14th May 2019. The launch event will be held across New York, Bengaluru, London, China. The company has released the event tickets today at 10 am. Anyone can book a ticket to watch the live launch of OnPlus7 series.OnePlus is inviting fans to join hands on the launch event. Price of the card is Rs,999, interested people can book it.

Ready to Go Beyond Speed? Invites for the #OnePlus7Series Launch Event are now LIVE 🚨

How to get an event ticket of OnePlus7 launch?

Here is the easy guide to get the event tickets
• Click On the given Link  http://bit.ly/2W7fHY3
• You will reach this page. 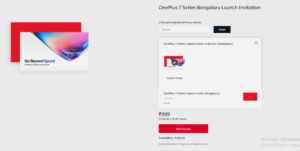 • You can directly book your ticket from this page.

OnePlus CEO Pete Lau already announced in an interview that the OnePlus 7 Pro (without telling the name) would be focused on the display and touch of the device. According to rumours and promotion going on from OnePlus is spending triple on OnePlus7 series.

Assembly Election 2018: Counting for 5 major states will start on...