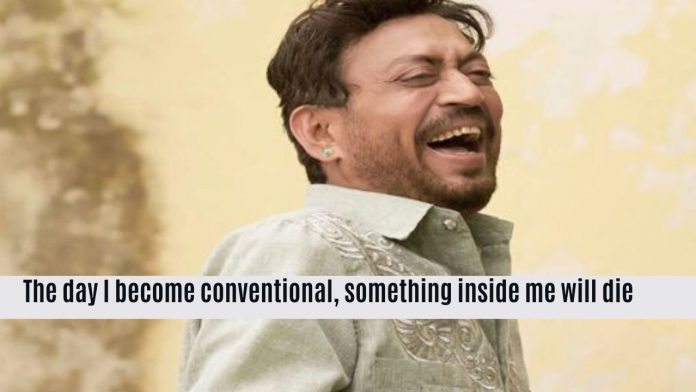 Actor Irrfan khan died today in kokilaben Dhirubhai Ambani hospital,Mumbai.He was suffering from the colon infection.In the last days Irrfan khan was surrounded by his family and close friends only.Irrfan khan is the one of the leading name in the bollywood industry.He was known for his expressions and way of acting

Statement released on behlf of Irrfan Khan Family
“I trust, I have surrendered”; These were the some of the many words that Irrfan expressed in a heart-felt note he wrote in 2018 opening up about his fight with cancer. And a man of few words and an actor of silent expressions with his deep eyes and his memorable actions on screen. It’s saddening that this day, we have to bring forward the news of him passing away. Irrfan was a strong soul, someone who fought till the very end and always inspired everyone who came close to him. After having been struck by lightning in 2018 with the news of a rare cancer, he took life soon after as it came and he fought the many battles that came with it. Surrounded by his love, his family for whom he most cared about, he left for heaven abode, leaving behind truly a legacy of his own. We all pray and hope that he is at peace. And to resonate and part with his words he had said, “As if I was tasting life for the first time, the magical side of it.”

Recently Irrfan Khan mother died on 25th april 2020.He want for his mother funeral.The rumors of his death were spreading from the Tuesday but confirmed today in the morning.

Ifran khan movie Angrezi Medium released before the lockdown in india.Irfan khan was not the part of the promotions due to health issues. He shared a video message with fans about the releasing of the film. Irfan khan worked in the so many renowned movies like Lunchbox , Jurassic park, pan singh tomar.Each character of his movie has a different fan base.

1.“I’ve never looked to create an image where people fall in love with my face or style. It does cross my mind. But I’ve been trying to create a space for myself where I don’t depend on that.”

2. “The day I become conventional, something inside me will die.”

3. “When you are young you are fascinated by so many things. Some things drop, some stay . I can be without anything but I cannot be without nature.”

5. “Wanting fame is a disease and one day I will want to be free from this disease, from this desire. Where fame doesn’t matter. Where just experiencing life and being okay with it is enough.”

6. “Every time. We have a youth audience. It’s not Hollywood where a 50-year-old is playing the lead character. So the effort is to look younger, which sometimes is not at all enjoyable. People look at an actor and say that he doesn’t look what he’s pretending to be. I hope it changes. I hope people can play their own age.

8. “My mother feels important when people bring her garlands. But if she came to know I’m working with an injured ankle, she would have a fit. She’d start scolding me. She’s happy, but her desire, her greatest desire would still be for me to go back to Jaipur and do a normal job like a teacher.”

Quotes by Irrfan Khan that will make you admire the actor even more.

9. “I’m not a very talkative man, and people are threatened by silence. If you’re sitting in a group and you’re not saying anything, people start getting insecure. They start thinking, he’s a snob. Or, he’s thinking something negative about me. Silence brings out your devils.”

10. “It pains me when a film actor or a cricketer is a youth icon. I don’t have anything against them. They are great entertainers and useful to the society. They contribute to people’s lives. But they are not heroes.”

Captain Marvel Review In India : how the marvel stars are...

Most polluted countries in the world according to reports