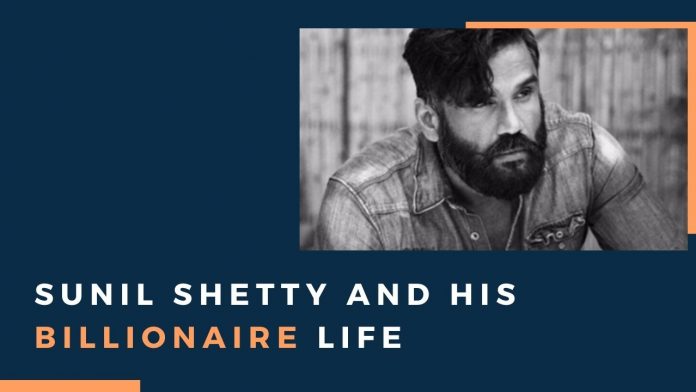 For more than two decades, serving the Bollywood industry, he is the renowned, established, celebrity Indian film actor of Bollywood. There is a more with his name. He is also a Celebrity producer and Smart Speculator (businessman). Hang on, Guys! We are talking about the great personality, a Filmfare Award winner, and who has worked in more than 110 films in his career. He is None other than Bollywood Superstar Sunil Shetty. Sunil Shetty is one out of the Bollywood entrepreneurs he runs his production house under the name of Popcorn Entertainment Private Limited.

Starting his career as an action hero from his very first film Balwaan (1992) to the current year (2020), he is entertaining us with his stupendous acting talent.

Relationship with his family, Shetty is very possessive about his family. His marriage was held in 1991 with Mana Shetty. He loves his sister Sunita Tarun Partap very much. He has two kids, Boy kid name Aahan Shetty and daughter kid name Athiya Shetty. Athiya has done a debut film in Bollywood during the year 2015. An NGO for the underprivileged kids is run by Shetty wifes Manna Shetty. Sunil Shetty is a kickboxing player and has a black belt in it.

Sunil Shetty as a Businessman

When we talk about popular businessmen of Bollywood, there are so many popular names which are available on this list and one name is of Sunil Shetty, who is popular as a celebrity businessman. But few people know what Sunil Shetty business is? When we talk about Sunil Shetty business stories, there are so many which we can share with people. In 2019, Sunil Shetty invested in a mobile fitness app named ‘Fittr.’ This app is launched by its founder Jitendra Chouksey in 2016, and Sunil invested in it later. Fittr app is a popular app among the fitness freaks and has been downloaded for more than 500,000 times on Android and IOS platforms.

Sunil Shetty has started working as a businessman more than a decade ago; he shifted to do business deals because he was getting fewer opportunities in movies at that time, and he chooses to do good business. Sunil has studied hotel management, so he decided to enter the hotel business. Sunil is famous for his restaurant’s business in Mumbai.

He is the proprietor of ‘Mischief Dining Bar’ and a club ‘H20’, in Mumbai. In 2004 Sunil Shetty was handling a floating restaurant named ‘Suzie Wong’ which was closed due to the expiry of its license. It was famous for its good food among the night lovers. Popular with the nickname “Anna” with his loved ones and for Indian People, he also owns a boutique name ‘Mischief.’ Sunil Shetty also a possessor of a water adventure park adjoining with club H20. His ‘Mischief Dining bar’ was closed by him in the year 2010, and after that, he inaugurated a new restaurant named Little Italy. This restaurant was earlier owned by his father at that time. It was a Udipi restaurant

Before coming into movies, Shetty was fond of playing cricket and want to be a professional cricketer. He used to swing the bat at playgrounds till he was criticized by the politics of the cricket world. Once in his interview, he said that “One day I just dropped the bat and walked out, never to return.” He was a good player and still loves to play it. He leads as a captain of the Mumbai Heroes Cricket team whenever a Celebrity Cricket League is organized. Sunil launched Ferit Cricket Bash for cricket lovers in December 2018, and he is the maximum shareholder of this bash. He is running an interior decor boutique naming R House with a partnership with his wife Mana Shetty, in Mumbai

Most of the Bollywood actors prefer to invest in real estate in the residential and commercial sectors, whichever is favorable. Out of some stars, some prefer to be real state developers, and Sunil Shetty is one out of them. Yes! He is the entrepreneur and also a real estate developer. In the year 2013, Sunil started a company name S2 Reality and Developer Pvt Ltd. It is a good working company and has sold many homes until now. The actor has also built up magnificent homes in Khandala, which is a hill station near Mumbai. If someone wants to know How much property does Sunil Shetty have? Then there is lesser-known info about it, but he owns a farms house at Khandala developed under the project of his company S2 reality, an expensive Hummer H3, Rolls Royce, and Mercedes-Benz Suv cars. He also has a share in Aalim Hakim salons in Mumbai.

There is no doubt that Sunil is a versatile actor and has worked for many directors and producers. However, the actor is far from the limelight for a little bit, but his net worth shows that he is still earning as one of the popular Bollywood actors. Sunil Shetty Net Worth Is spectacular 10 million$. The main source of such high income is purely its acting talent. This talented actor is currently charging Rs 2-3 Crore per Hindi movie. Sunil’s Shetty business turnover can be estimated from all his business he runs as he also owns the Cricket team, Mumbai Heroes, under the celebrity cricket league.

Sunil Shetty is a helper and magnanimous. He, from his heart, care about today’s world and also has soft-heartedness and calmness. He has a broad view of life and does all works along with a large point of view; all deals are done by him only after deep research on them. He shines with a self-explaining Utopian personality. He co-works with those people who can provide him long term benefits in the area of his business. He is full of anti-discrimination and is far away from racism politics going in today’s world.

He is very creative in various fields like Interior decorating, Photography, Landscaping art, and a few other areas which give the live examples of Sunils talent serving to update the environment around him. Due to his fallibility or others, he sometimes gets a little disappointed but never gives up hope and update himself every time to fight for achieving his goals. He never sits and feels satisfied with what he has achieved in his life rather than it; he pushes himself to not miss the chance for greater opportunities in the future. Shetty is a passionate man who always ends up with good whatever he has started

Sunil has earned wealth through unpredictable and impenetrable ways. If he has used this money selfishly, then we can say that currently, he may not be having anything in his hands as compared to what he has today. The road to success is his nature of giving and sharing and expecting nothing in return.

How flipping a coin can really assist you with completely changing...

Screenagers: The Impact on Children’s Life Growing up in Digital Age