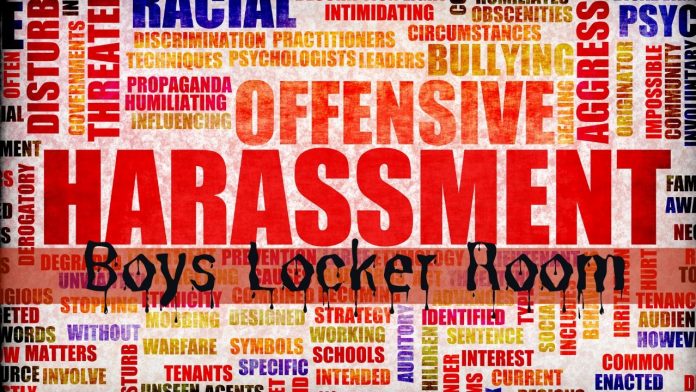 Amid COVID-19 pandemic when the world is fighting against an invisible virus, a girl from South Delhi is struggling for respect and fighting with a group of boys for self-dignity. But surprisingly this is not new in India, maybe the girl is lucky as she resides safely in her house due to lockdown.

India reports a rape case in every 15 minutes. Here, in religious books, Nari is worshipped but in the real world, she is raped or is deprived of her rights. In the constitution, she is equal to men but daily she fights for equality in this society. Every year women empowerment day is celebrated but still, she is not able to fight her complementary gender.

India is no more a great country for women. Mother India is not safe for her daughters. This small incident of the Boys Locker room gives a real report of girls in India.

It shows that today the minds of many Indian youths are filled with sluggish, hatred, and criminal ideas which should not be the case for the bright future of India. Boys Locker Room incident depicts the direction where the young population is leading.

What is the boys’ locker room?

The boys’ locker room, an Instagram chat group of teenage boys and girls aged between 15-18 years explains the fact why India is not safe for girls. The screenshots of the Boys locker room chat group of teenage boys from South Delhi read their conversations on gang rape, rape, and indulge in body-shaming and slut-shaming, derogatory comments. This clearly states the mental health of this age group.

The chat shows a discussion carried out by boys defaming girls and hatching plans of gang rape and sharing pictures of girls. In one of the shared screenshots from the group chat, one boy can be seen convincing others for the gangrape of a girl and asking to show the right place she belongs. Furthermore, the boys were keenly discussing the parts of the girl’s body and making sexual comments.

Several girls were abused in the screenshot and one among then was the first girl who took out the conversation and shared screenshots on the internet and twitter. After sharing these she went off as her security was threatened. In her last post, she also wrote that boys and girls should learn from this incident and should try to make a difference in society.

The screenshot got huge attention from netizens both in negative and positive aspects. This divided the Indian people into two groups, one supporting this immoral action of underage boys while the other got enraged and demanded police action on this.

People who are supporting these boys’ locker room incidents are in one way supporting objectify girls and extremely lewd and vulgar comments. This is what one can call as online harassment of girls. These groups of people emerged and supported the group by calling Instagram harassment a fun activity. They didn’t stop here, they went far blaming the girl that it was done for publicity and accused her by giving illogical reasons. The use of such an abusive language, sexual remarks, and planning of gang rape simply can not be just for fun.

The thoughts of these boys have turned into their habits as the chats revealed it may not be for the first time. This heinous action has become their habit and maybe in no time, it would have become their character.

The boys’ locker room is not a single group involved in such shameful and sexually abusive activity, on social media there exists a wide world consisting of lakhs of such locker rooms where such sexual abusive chats take place on regular basis. It was just a small group that caught red-handed just because the girl has the courage to go against this.

These activities become the root cause of future crime like gang rape and online harassment. The tools used for online harassment are the same which are planned by the boys of the locker room. Threats of gang rape, body shaming, character assassination, and slut-shaming. Incidents like this show that in the mind of such people the existence of women in this world is limited to its body parts. When any girl goes against these inhumane persons they plan to take revenge by circulating the pictures of the girls with shameful language.

The action taken by legal authorities:

Delhi police registered this case under various sections of harming reputation, an act intended to insult the modesty of women of IPC and publishing or transmitting of material containing sexually explicit act under the IT Act.

Delhi Police has arrested 10 members of the Instagram group and has asked Instagram to information of other account holders. The group has 30-35 group members from 5 different schools in south Delhi. However, some of the group members were inactive during the chat session. According to Spokesperson of Delhi police major 10 identified members are examined while the minors were being dealt as per provisions of Juvenile Justice act.

Society needs to cultivate moral values and make people understand the concept of consent & respect everyone’s privacy from a young age. This group chat is not about those boys it speaks about the mentality because of the freedom they receive to talk about women the way they please. In India, people think there is no accountability for their actions. For women, it is about respect and a power struggle that dates back to its root in the past.

Shilpa shinde not happy with the Big Boss 12 winner Dipika...

Doctor Protest in Bengal : know why the most educated community...