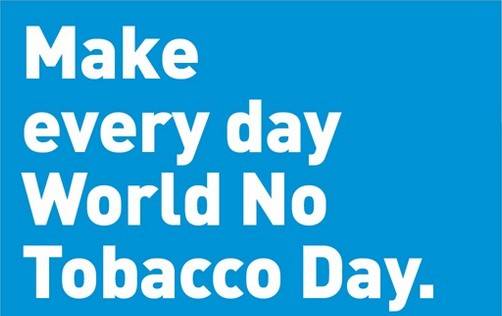 Why we celebrate World No Tobacco Day?

As we now that world no tobacco day is celebrated on 31 st May all across the world, this marks the spreading of awareness related to the health risk of tobacco consumption. On this day WHO since 1987 heightens the ill effects of smoking and urge people to adopt a healthy lifestyle and reduce the use of tobacco products.

According to data released by WHO tobacco use is being associated with the death of more than 7 million people all across the world every year. And the number will keep on increasing till the use of tobacco is restricted in every form either cigarettes or consumables.

The main cause of so much work being done by international health organization toward the ban of tobacco is its association with cancer. It is the most common cause of cancer either mouth, pharynx, larynx or lung cancer. In countries like America and even India, this is the most common cause of cancer.Not only cancer the over abuse of tobacco is associated with heart diseases, stroke, and many other
health issues.

The main focus of world no tobacco day 2019 is on lung health as the most lethal impact of tobacco is on the lungs and bronchioles. Slowly along with the time substance released in the arterioles of the lung kill the normal cells of the lungs hence tampering the structure, the air spaces of the lungs get filled with coal-like black tarred substance which effects the air capacity of the lungs. A person who is chronic smokers is more predisposed to many forms of cancer and lung cancer is most common among them. As the smoke during smoking tobacco directly enters the lungs along with its passage it irritates the tissue of lungs with leads to the formation of benign nodes or tumors, this may shape up as malignant cancer in the future.

Lung cancer is responsible for over two-thirds deaths all across the globe; the commonest type of cancer in India is lung cancer, thanks to the unlawful unrestricted supply of cheap tobacco. Not only this proper awareness is needed to create regarding passive smoking that is when someone is not smoking itself but is exposed to a large amount of smoke as the smoker is present in the same room. Wife or children of such chronic smokers accidentally become exposed to this disease. Tobacco exposure may causes many other lung diseases like chronic obstructive pulmonary disease. This affects the lung capacity of young age smokers and predisposes them to lung failure. Early cessation of smoking as soon as possible is the only way out from the prevention of lung disease which may even cost you your life.

Activities are conducted on an annual basis which is the apt time to create awareness and discourage people to use tobacco. The discussion and focus on world no tobacco day 2019will be on the campaign which will highlight

The campaign also sees various ministries and department forming plan of action and policies to serve the call of the time. This may follow advocating protocols and engaging companies, stakeholders all across the globe to fight the over-consumption.

All countries should take the matter seriously and respond to the WHO protocols to combat the effects of tobacco and its implications. This should include a dedication to the fullest and implementation of policies enforcing them is the most effective way of tobacco control aiming to reduce the demand as well as the production. All this has to start from the root cause and have to be dealt in this manner only, on the lowest basic grounds.