India has come a long way since the time of independence. It is on the verge of becoming one of the leading largest economics in a matter of a few years. However, no matter how much it has increased, the citizens are taking their own time coming out of illusionary and inconsistency. One such myth that is surrounding the life of people is mensuration. It is taking over a large part of the Indian economy that is set out free by Aditi Gupta.

Aditi Gupta has managed to become a sensation in the modern world. She has managed to give privilege to the girls to speak out the cycle openly that was just taken as a form of Whisper that is still around. We all have heard the stigma saying ‘don’t say it loud, Stay away from pickles’, ‘Don’t enter the temple’, and the list is still going. However, with time, it has managed to change the whole process and now converting to a better life for the individual.

Aditi Gupta Menstrupedia Surging Around us

Mensturpedia have managed to take over a lot of myths surrounding the cycle. In addition to this, it is now focused on hygiene and health of cycle while educating people about it. The book contains all essential information about menstruation cycle that is now increasing awareness among individuals. Also, earlier people were vulnerable about the information and used to avoid the health concern that menstruation cycle might have. The information is focused on periods to give necessary information to people around in the form of songs, videos, articles, etc.

The book is established by a team of experts including Aditi Gupta that have focused on every single step of the menstruation cycle. With the necessary information out in open, they have managed to debunk the myths that we all were living with. At the age of 12, Aditi started the cycle with a new experience. But her mother, similar to others, were surrounded by myths and made her have a bath with the water quality of two and a half mug to have the two-day cycle.

“I informed my mother about it, and she made me bathe with two-and-half mugs of water. By doing so, she believed my flow would last only for two-and-half days.”

The jinxed experience and first period made Aditi vary of these rules that she followed for a long period of time. From stop worshiping God to avoiding others bed, it made her sick of such rules. However, with education, she knew that she is here to strike out all other rules and hence begin the life cycle and history of Aditi Gupta entrepreneur.

Aditi states her experience and struggles while suffering from Mensuration. She said“After my periods would get over, I had to wash the bed sheet, whether it was stained or not. In short, I was treated as impure or polluted. I was expected to have become ‘pure’ only after the seventh day when I had taken a bath and washed my hair.”

She broke off every stereotype by becoming famous for being different. She debunks hypothetical errors that we all were following blindly. In addition to this, it has started an openness in the society about periods that was considered a taboo. With the books shining, people are coming out of their shells and taking an initiative to overcome such taboo with their own style.

Future of the Menstrupedia

Aditi Gupta as the Menstrupedia founder has taken the surge to a new level. On top of that, women, teenager and kids are now coming forth to empower over the world with the right knowledge and information. 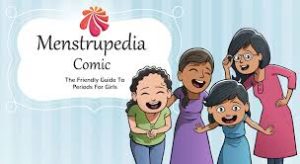 The comic is converted to the contemporary series with a total of 15 languages reach a worldwide audience. The aim behind such surge is to reach maximum people and bring out the change that our society requires. It has managed to abolish taboo and take a step forward to better the health of people with the right knowledge.

The aim of a young entrepreneur is to reach people and help them rise in the conservative world and make a place where nothing can take them down.

Deep Kalra : The Man Who Changed the Forum of Indian...