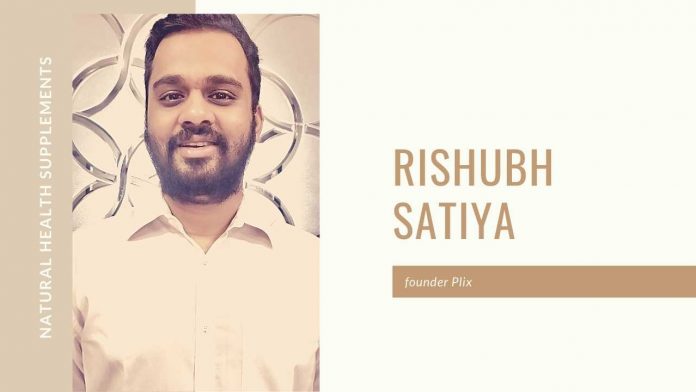 Rishubh Satiya founded Plix,a clean, gluten free, non gmo,sugar free brand  with a sheer objective of catering to the fundamental nutritional needs of the common masses. Rishubh recalled his post-graduation days at IIT Roorkee, where he was grappling with a hectic lifestyle, struggling to meet his basic nutritional requirements. The nutrition brands available at that time seemed to have constrained its scope to customers who majorly indulged in bodybuilding and heavy workouts. He, however, was keen on intaking a clean plant based protein to fulfil his basic nourishment. That was the first time he noticed a gap in the market and began working with technologists from Roorkee on creating a healthy plant based protein. With the entire stigma associated with vegan diets, he strived hard at busting myths and misconceptions of veganism and finally came up with the idea of Plix.

Commenting on how he built an action plan and gathered resources for Plix, Rishubh says,”Disintegrating the idea into smaller plans and putting them into action was the most difficult task. From juggling between manufacturers and technologists to running to labs and getting the products tested and approved, I had to toil on my own. Then with the help of my friends and family we set up the website and finally made Plix happen. We started with an amount of 10 lakh rupees, some of which was my own savings from my previous consulting job and bootstrapped the company. Today we are expecting a turnover of around 25 crores for the fiscal year 21-20.”

Plix consists of products ranging from Plant protein to Immunity Boosting Multivitamins and Supergreens. It is also coming up with a new launch, Apple Cider Vinegar which acts as a detoxing element in the body. Plix products prominently obtain protein from pea and brown rice. It also consists of antioxidants, digestive enzymes that are completely sourced from natural substances like Grape seed extract, Papaya, Pineapple and sucralose that acts as a natural sweetener. Unlike most other brands that offer limited alternatives to choose from for flavours, Plix has a large assortment of flavours like Mango, Vanilla Banana, Cafe Mocha, Raw Chocolate for protein, Tropical Orange for Vitamin C, Lemon Burst for Supergreens and Watermelon for BCAA. Even the flavours are obtained from natural ingredients, for example the mango flavour consists of real, frozen dried mango powder, cafe mocha has real filtered coffee and the chocolate flavour has cocoa powder imported from Ghana. It does not indulge in preservatives or artificial sweeteners.

The past few years saw a wave of veganism with more and more people wanting to embrace the plant based lifestyle as an aftermath of increasing awareness on animal welfare, climatic change etc. Vegan foods, from quietly tiptoeing its way into the menu cards of some select premiere restaurants of the Tier 1 cities, has now thrown itself onto the breakfast, lunch and dinner tables of common households.Veganism has slowly and steadily begun shedding off the burden of prejudice it had been carrying for years. “Vegan Diets aren’t filling enough”, “Dairy Milk is an essential for Calcium”,”Vegan diets make you weak” are some of the most common misconceptions that people had been harbouring for years but now the times are changing for good.

Especially with the entire Covid-19 situation, people have consciously made the switch to consuming clean plant based food. Research has stated the importance of micronutrients and Vitamin C in the treatment of patients infected by Covid-19. As there are no vaccines or medicines available, people have resorted to enhancing their immunity by consuming the right food. They are watchful of the kind of food they are consuming and the nutritional benefits it holds.While the world has now awakened to the importance of one’s wellness and health, Plix has been emphasizing on it from the longest times through its Immunity Boosting Supergreens, Green Elixir Multivitamins and Vitamin C.

Addressing the same, Rishubh comments,” We have always extended our research beyond just fitness and tried to focus especially on the millennials who neglect their wellness and health owing to their busy schedules, something I personally experienced back in my days. We have also taken special care of resonating the brand with the common masses and avoided restricting ourselves to bodybuilders or people of a specific age or gender. This is something that we have been extremely particular about as we came up with the idea of Plix to bridge this market gap in the first place. We have already experienced a huge growth in Tier 1 cities but are now trying to gain attention from the Tier 2, Tier 3 cities as well.”

“We are also planning to introduce products specifically dealing with easy digestion, weight loss, skin care, hair care and similar other issues millennials turn a blind eye to.The pandemic has coaxed a lot of people to switch off and reconsider their take on their wellbeing. Although we dealt with hindrances in our business in the beginning of the lockdown , we have grown twice as much in the months that followed”, he further adds.

Having flourished 20 times its initial investment in only a year, Plix is looking forward to growing even bigger and better in the years to come while continuing to keep its promise of being accessible to a wide range of audiences.

How Indian Railways Serving the Nation in Coronavirus Outbreak?