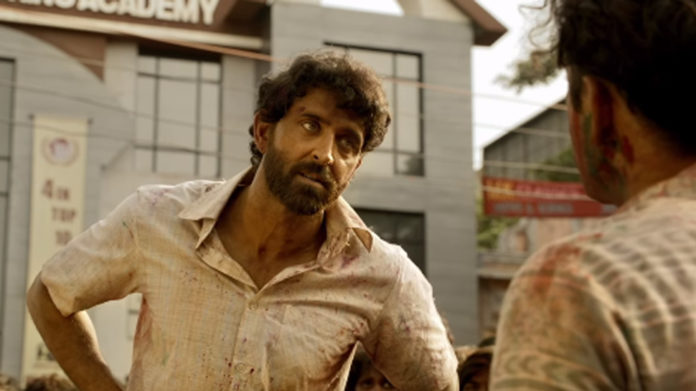 Super 30 – an inspiring, sincere and well intentioned film showcasing the real life story of Patna based Maths whiz Anand Kumar is anything but a super film. Resting on a captivating premise of cracking the toughest thing in the world – how to crack the JEE thereby showing the perpetual battle between the privileged and underprivileged, entitlement and talent, raja and rank – to score a seat in the coveted IIT, thereby transforming education and learning.
This is a good hook and with a good story telling, it serves as a good recipe for an emotion inducing film. That’s exactly where Super 30 disappoints. It is not treated right. It appears that the director Vikas Bahl and writer Sanjeev Datta are not fully convinced with the potential of this dramatic story.

Why else would they exaggerate the facts thereby removing important facts and add up extra melodrama? Hrithik Roshan, looks nothing like Anand Kumar. It is disheartening to see him slathered with brown body and face paint, stereotyping the belief that poor Indians are dark skinned. However, the actor in the superstar charms in certain parts with innocence and gives life to the character.

We meet him first as a young son of a postmaster in Patna. This maths genius cannot afford to go to England. The actor shows his mettle in one of the most promising scenes where he desperately appeals to a minister on his promised financial support. There are some other scenes that raise your emotional quotient like the one where his Cambridge acceptance letter becomes the papad wrapping paper that he sells after a tragedy hits his family. Life slowly comes to track as he is hired as a teacher by Lallan Singh, played by Aditya Srivastava, in his super fancy coaching institute.
We watch as Anand struggles to set up his own coaching centre to provide free coaching to underprivileged, promising students who cannot manage the exorbitant high fees of tuition centres. Sounds like a classic tale of underdogs. But the narrative slowly starts to slip away as the film starts to blur fact and fiction. To stress the big struggle of the protagonist, the makers end up fabricating incidents. This is a shame as a story this extraordinary does not require so much drama.
There is a concept of creative liberty. But dramatizing a true story and making it Bollywoodish with too many songs, ear splitting background score and caricatured villains fails the film at many levels.

The cast and performance of Super 30

To be fair, the film has its positives as well. The supporting cast is very good. Aditya Srivastava as Lallan Singh playing the role of Hritihik’s steals the screen. Virendra Saxena as Anand’s father is terrific. And of course, as always Pankaj Tripathi – the new age reliable actor gives a stellar performance in a small role of a corrupt minister. Mrunal Thakur has a very limited role but shines through in a winning moment.
No prizes for guessing, but the film rests majorly on the shoulders and acting prowess of its leading man, Hrithik Roshan. Hrithik earnestly adds the sincerity in the character and film he is known for. He can be criticized for the wobbly Bihari accent, the distracting skin colour or falsely portraying Anand as a misguided superhero. But the actor does his best and strikes a chord with the audience by touching their hearts in many memorable moments.

Anay Goswami, Director of Photography does a good job in providing tangibility in an artificial setting. Instead of the real locations, the film is shot on the studio sets. So, if you are looking to find the flavor, colour or smell of Bihar or Patna in the film, you will realize that you have come to a wrong place. This is also a key problem in the film. It tries to tell you a true story but it doesn’t come across as real or authentic.

One of the most disappointing parts here is that a film with such a great story and potential received very little research and attention on the part of the students – who are at the heart and soul of this dramatic movie. As an audience, we don’t get enough understanding about these characters.
Super 30 comes as an inspiring movie with an important message. But the unfortunate part remains the drag storytelling. The edgy and overblown treatment weighs down the earnest and well intentioned message of the movie.