CES20, the much awaited convention has finally begun at Las Vegas. Major technological giants of the world showcased their amazingly mesmerising products at the show. 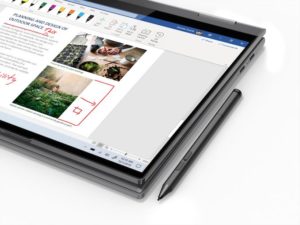 Lenovo, joined with the chip producer Qualcomm unmasked the world’s first 5G-enabled laptop, powered by Snapdragon 8cx 5G Compute Platform and working on Windows, at CES 2020 today. Lenovo Yoga 5G, world’s first 5G laptop is the result of the combined initiative called ‘Project Limitless’ which was first showcased at Computex 2019. The 2-in-1 laptop is extremely handy and ultraportable, which, as mentioned, runs on Windows 10. It is capable of using the mm wave as well as sub-6Ghz bands.

The device is expected to go on sale, starting at $1,499 (approximately Rs. 1,06,000),possibly in spring 2020 in some parts of the world. The laptop, unveiled in a press conference by Lenovo’s and Qualcomm respective chief officers, features fast charging capacity, offering an apparent 24 hours battery life and a 14-inch full-HD IPS touchscreen with an integrated fingerprint reader that comes along with an IR camera for Windows Hello security, Dolby Atmos sound enhancement, and eSIM support.

The ROG Zephyrus G14 is a premium compact model with an optional new ‘AniMe’ LED array on its lid. The TUF A15 and A17 are a gift to the gamer community. All models are expected to be launched in India by the second quarter of 2020.

What is Anime Feature?

The AniMe feature is a grid of 1,215 individual white mini-LEDs which supports animation up to 256 levels of brightness. It allows the users to create their own patterns and import animations too. This feature gives an extra immersive experience which will definitely attract avid gamers.

Asus also has claimed that this will be the first compact laptop to feature NVIDIA GeForce RTX Graphix along with AMD Ryzen Mobile 4000 processor that is based on Zen 2 architecture, featuring an octacore arrangement alongside 16 threads. And all this could add up to considerable heating which, according to the company, will be countered by laptop’s self cleaning cooling system.
As the convention will proceed major products, which have been causing much excitation will be unveiled before the world.